“The story of tonight” begins with a drunk but upbeat and happy toast in a bar. Although this song exemplifies the revolutionary spirit of Hamilton and his friends, it is mostly a filler song, and is nowhere near historically accurate. It does not advance the plot, however it continues the beliefs and thought processes of these four individuals. This song includes Marquis de Lafayette, John Laurens, Hercules Mulligan, and Alexander Hamilton, four rebellious, determined adults looking for a change. “The story of tonight” reiterates how all four of them want to leave a legacy for future generations, while also fighting for acceptance and equality. This sense of accomplishment and acceptance is shown when they sing, “And when our children tell our story…” blatantly representing their want of being recognized and remembered.

In 1840, John Church Hamilton wrote a two-volume biography on his father, Alexander Hamilton, speaking about his life experiences, and in February 2015, Lin-Manuel Miranda created the musical, “Hamilton,” telling the story of Alexander, and fulfilling the line, “And when our children tell our story…” The first line from the song, “I may not live to see our glory,” acknowledges the possible death involved and how they continue to preserver throughout it which would be considered heroic at this day and age. However, during Hamilton’s era, the idea of rebellion and retaliating against a global superpower would have never come to mind, because of the lack of belief in victory.

The big idea I related this most to, is “Emerging ideas and ideologies profoundly influence societies and events.”

After meeting, these individuals began to gain a sense of acceptance and hope listening to one another’s motivation and wants, connecting the end goals together, advancing their rebellious mindset, and sparking the start of a revolution. Without this meeting occurring, the revolution would have never started, and these four friends would have never sparked. They continuously state that “Tomorrow there’ll be more of us,” realizing that if this idea of change is taught to others, they could start a movement and a change, but without it, nothing will change.

To me, this song has a deeper meaning then the surface idea of revolution. There is this feeling of acceptance and belonging that these friends are looking for, whether they understand it or not. It isn’t only fitting in with those around them, but being at playing level with Britain and other influential people. The line “Tomorrow there’ll be more of us, stuck with me, because of the importance that it holds. By simply passing around these revolutionary thoughts, a few people can spark a change and grow a cause.

“Tomorrow there’ll be more of us.” This line represents the beginning of their battle, and to me it also shows concept of family or acceptance. In one of the letters Hamilton sends to Laurens, he states that he is engaged and apologizes for falling in love. He apologizes, because they somewhat had a relationship going on, and in this letter, he says at the end, “The lads all sympathize with you and send you the assurances of their love,” which to me, is a strong example of this idea of family, and becoming part of a movement where everyone has a common cause, where everyone is accepted.

“And when our children tell our story…” To me, this is the most important line in the song. It outlines all four of their wants, and is the main idea of the whole song. These four friends not only want to be someone or prove themselves, they also want to change their future generation’s lives. When they say “And when our children tell our story…” they’re setting a mental goal, and when they achieve said goal, only then will they feel accomplished.

“I may not live to see our glory.” The reason why this line is so important is because of the dedication and emotion it holds. These four men are putting their lives at stake for something they believe in, something that benefits those they fight for more than themselves. They full acknowledge the fact that they may not survive their battles, yet continue to persevere through it. Now, considering our era and what our values and thought process is like today, this is completely acceptable. People are fighting for what they believe in and what they believe is right, or should be right. Rewind this to Hamilton’s era, and there it becomes completely different. Everyone was taught the norm, no one had the confidence to stand up, or even think about a change. 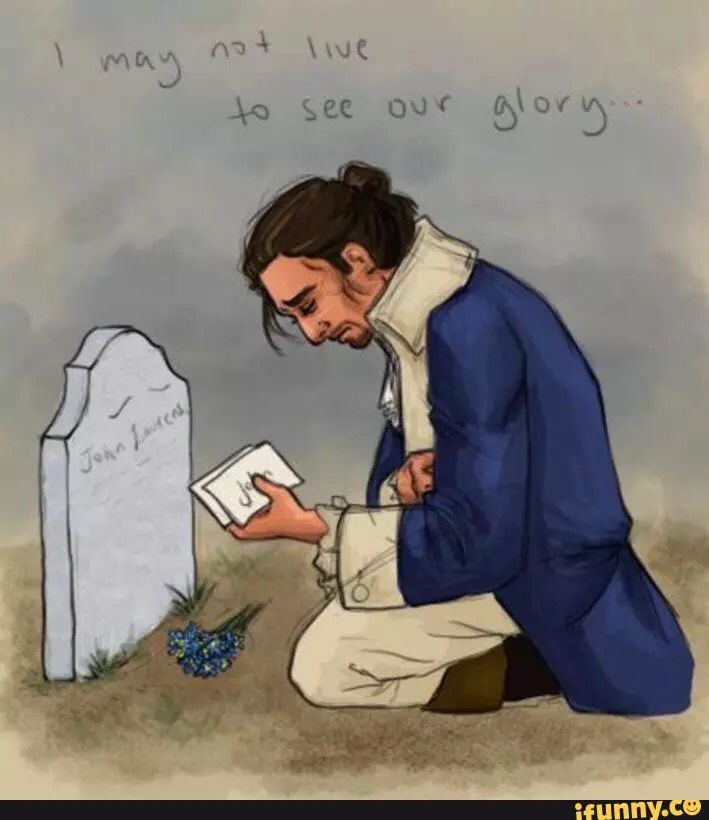